Joysticks Industrial Optical Joysticks and Their Importance in Critical Operations

Industrial Optical Joysticks and Their Importance in Critical Operations

Several technologies have been developed to help optimize human machine interface. They are designed to enhance the various processes of your systems forming a link between the user and the machine. The right design and construction of these machines will allow effortless integration into an automated system. An important type of human machine interface input device is the joystick. It provides control and help in monitoring and maneuvering activities. Various types of joysticks are available for rugged man-machine interactions. Potentiometer, Hall Effect, inductive, electronic, and optical are a few types of joysticks currently available. Of these, optical joysticks offer maximum reliability in critical operations.

What are Optical Joysticks?

Optical joysticks are electro-optical input devices. They utilize light and electricity to receive and transmit signals respectively. They are extremely useful in harsh weather conditions since they are unaffected by vibrations and other movements (as witnessed during turbulence, etc.). They don’t consist of many external and internal parts and buttons, as is the norm with other types of joysticks. Hence, they make extremely useful gadgets in military, aerospace, and other critical industries. 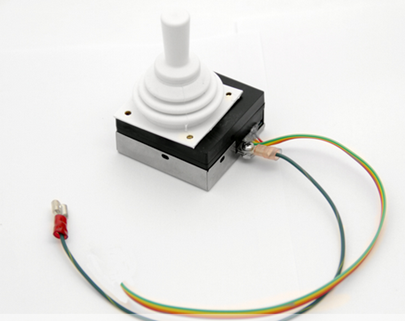 An understanding of the design, layout, and components of an optical joystick is the key to understanding the mechanism of the machine.

The joystick is attached or placed on a Printed Circuit Board (PCB). Two photoemitters are placed on the PCB. The position of these components is essential to calculating the direction of the force applied by the user. Hence, they are placed at right angles to each other. This allows them to monitor light falling in from every direction.

An annular flange (or skirt) is placed near the actuator as well. This flange is used to block or transmit light signals from the photoemitter to the photo detector. Hence, it is placed between the two components. The actuator is connected to the external joystick that the user operates. When the user applies force on to the external part of the joystick, the actuator is activated and it displaces the flange. According to the direction of the movement, either the flange allows the light to pass from the photoemitters to the photo detector, or it blocks the light.

Whenever the actuator performs any movement, the magnitude of the movement and the intensity of light are compared to the intensity of the light when the actuator and the flange are at rest (at neutral). The input device is able to accurately calculate the magnitude and direction of the force based on the movement of the flange. Thus, optical joysticks utilize light and force to calculate the application’s movement and the amount of force applied.

These joysticks can be customized to provide maximum efficiency. They can be manufactured with a single, two-position, or ambidextrous grip. The grip and placement of buttons can be customized according to the application. Heavy-duty springs are used to provide a high amount of friction and minimal movement. This is done to avoid activation from accidental movement. These precautions are taken in lieu of the harsh environments that these joysticks are used in and the important functions they control.

Optical joysticks are now being widely used across several critical applications. They are manufactured to provide precise and durable operation. These machines are essential in applications that require reliable functioning without any negative effect on the output received by the user. The following are some of the benefits that optical joysticks offer:

The benefits of optical joysticks go beyond operation and function. The joysticks are constructed without any switches or moving parts. This reduces cost of maintenance and the dependency on several small parts. The fact that fewer parts are used to construct and operate the joystick reduces operational complexity. The wear and tear of the parts is minimal since the number of parts is minimal and most of them don’t move. Additionally, the life of these gadgets is longer compared to other types of joysticks. During maintenance, it can also reduce the down time of the machine.

The technology and materials used for the construction of optical joysticks is far superior to that used in other industrial joysticks. Thus, when purchasing these joysticks, it is important to take stock of the surroundings, the application, and the importance of reliability. The importance of reliability in the application should balance out the costs. The main advantage that optical joysticks offer is that they are unaffected by EMI, RFI, vibrations, and movement. Thus, they are useful in industries as important and serious as the military. Careful consideration should be given to these factors.

Although optical joysticks are dependent on light for proper functioning, they are designed to account for the change in light intensity due to temperature, light source, or any other factor. Some highly innovative joysticks feature differential light sensors that help them perform seamlessly through time and other external factors.

Addressing the needs of a user and an application in demanding environmental conditions or in critical and heavy-duty applications, industrial optical joysticks have been constructed to offer immense reliability and stability to an application.